Call Us: 717.308.2385
Trend Thoughts.
Aimsights / Millennials at Home / Millennial Leaders – What We Can Learn From Football

Millennial Leaders – What We Can Learn From Football 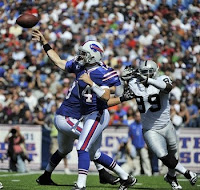 I love football and have been a Packers fan my entire life, but I grew up in Buffalo so I’ve always had a soft spot for the Bills. It’s easy to be a Packers fan these days, but it’s not quite as easy for Bills fans. Yesterday it was great to see the Bills win for the second week in a row in a very exciting game against Oakland. As I read the analyses of the game today in the sports press, I couldn’t help thinking that this year’s Buffalo Bills provide guidance for a way out of our economic doldrums in America. We are going to need quick-thinking, creative Millennial leaders like Buffalo’s Harvard educated quarterback, Ryan Fitzpatrick. And the older generations are going to have to believe in them and mentor them…

For those of you who are not football fans (or even those who do follow the sport), I suggest you read

“Why This Year’s Buffalo Bills Will Win the Super Bowl and Why ’90s Bills Didn’t” by Buffalo sports columnist, John Wingspread Howell. After only two games, I am not predicting that the Bills will win the Super Bowl, but they have at least shown that they have the grit and determination to win games. (I also have to mention that Buffalo has the most loyal fans in football that have supported their Bills through the leanest years and in the worst weather imaginable.) The gist of Howell’s article is that this year’s Bills do NOT have the star power of the 90’s when they made it the Super Bowl an amazing four years in a row, but were never able to put together a win. Instead they are “a motley gaggle of no-names coached by a no-name retread, and quarterbacked by a Harvard geek who is a consensus backup at best—until he’s not.” As CBS commentator, Marv Albert said, “Football is the only profession where being a Harvard grad is a liability.” But, according to Howell, “Ryan Fitzpatrick is smart enough and talented enough to turn the liability into an asset. What he can’t do with Manningesque finesse, he does with brains, grit, passion and faith. Faith in himself, his coaches, his team.” Fitzpatrick’s Boomer bosses, coach Chan Gailey and general manager Buddy Nix, are “starting look like geniuses” because they believed in Fitzpatrick and stuck with him.

This is what American business needs now and in the future: well-educated leaders who believe in themselves, who believe in the leaders above them and believe in their team of workers. And then we need to put it all together in a creative way to come up with new ideas and NEW solutions. When I see that it’s possible in football for experienced older managers and young creative leaders to work together and succeed, it gives me hope for America’s future. -Robin Albing